I wasn’t expecting to be swept away, but I was, into the port of Iraklion, Knossos, the once glorious capital of Crete.

We meet the Roman poet Ovid, known for his epic poem: The Metamorphosis, on a research trip for his work-in-progress. A poet, not a historian, he visits Crete to see the fabled home of the Minotaur for himself.

In the port of Iraklion, Ovid meets the largest man he’d ever seen, unshaven, hair that looked like it was chopped with a clumsy blade. He’s also his new guide into the ruins of Knossos, and into the ruins of the Labyrinth. Where Ast, otherwise known as Asterion, otherwise known as the Minotaur, the half bull and half man of Greek Mythology, begins to tell his side of the story. Was it a true story? Ovid’s scholarly quest for knowledge wins and he’s all-ears, listening to Asterion’s tale. So was I.
I was entirely compelled to hear more of his story.

We learn of King Minos, Asterion’s cruel stepfather, and about his abused, but devoted mother. Deformed from birth, accused, and insulted throughout his life, a product of a God, he grew up despised by King Minos. Reminded of Asterion’s mother’s infidelity with Poseidon, the Minotaur’s real father.

Asterion begins his tale, from before he was sent into the Labyrinth. He tells of his great love, with so much tenderness for a brute. But was he?
There is much heartbreak, and a lot of humanity in this telling. Ovid can’t help following the stranger home and writing down every word he speaks. Even if the stranger is recounting a story that happened 1000 years ago. But it was entirely believable—for Ovid, and for me. Ovid is enraptured, and the wine keeps flowing.

There are some fun twists, I realized as I looked up each Greek character. Theseus is there and we learn so much about their relationship and Asterion’s side of the story. The action scenes were fluid and entertaining, and the depth of loyalty, inspiring.

I love how the book opens with the cast of characters—for those of us who need a little refresher. MINOTAUR is such a well-written, entertaining story, and could very well be, the true tale of the Minotaur. A great YA read!

“But people didn’t want the truth. They wanted to believe in heroes and monsters.” 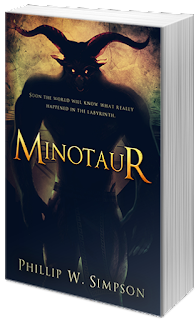 “Where shall I start?” asked Minotaur.

Ovid made an expansive gesture with both hands. “Where else but the beginning of course.”

Minotaur nodded his huge head. “Yes,” he said. “Yes,” his eyes already glazing over with the weight of thousand year old memories. And then he began.

So begins the story of Asterion, later known as Minotaur, the supposed half bull creature of Greek legend. Recorded by the famous Roman poet, Ovid, Asterion tells of his boyhood in Crete under the cruel hand of his stepfather Minos, his adventures with his friend, Theseus, and his growing love for the beautiful Phaedra.And of course what really happened in the labyrinth.

This is the true story of the Minotaur.

Phillip W. Simpson is the author of many novels, chapter books and other stories for children. His publishers include Macmillan, Penguin, Pearson, Cengage, Raintree and Oxford University Press.
He received both his undergraduate degree in Ancient History and Archaeology and his Masters (Hons) degree in Archaeology from the University of Auckland.
Before embarking on his writing career, he joined the army as an officer cadet, owned a comic shop and worked in recruitment in both the UK and Australia.
His first young adult novel, Rapture (Rapture Trilogy #1), was shortlisted for the Sir Julius Vogel Awards for best Youth novel in 2012.

He is represented by Vicki Marsdon at Wordlink literary agency.

When not writing, he works as a school teacher.
Phillip lives and writes in Auckland, New Zealand with his wife Rose, their son, Jack and their two border terriers, Whiskey and Raffles. He loves fishing, reading, movies, football (soccer) and single malt Whiskeys.

How Adorable is this! 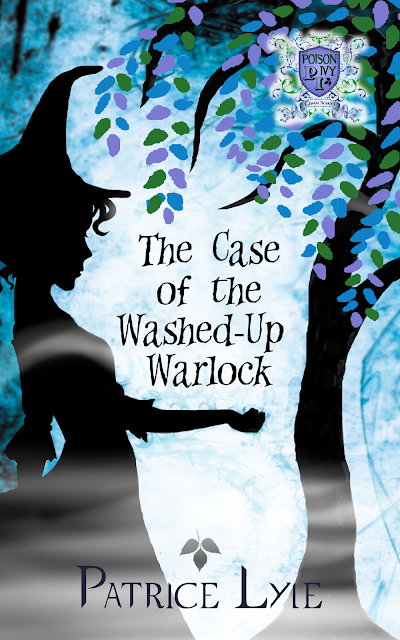 When thirteen-year-old Tulip Bonnaire’s super-cute crush, Dexter, is threatened with expulsion from Poison Ivy Charm School, she can’t help but take the case. Someone has put a spell on Garrett’s Levitation skills and all the evidence, including the testimony of a sea hag stone, points to Dex. Tulip can’t imagine Poison Ivy without him, so she’s intent on proving his innocence. But that means delving into an old secret to find out who turned Garrett into a washed-up warlock.

Author Bio:
Patrice Lyle has never met a ghost story she didn’t like. She’s been fascinated with the paranormal since childhood. She attributes this fascination to having heard old family stories of ghostly wreaths, ESP, and money hidden in the lining of antique purses. She grew up on the Oregon Coast and has a Master’s Degree in Writing Popular Fiction. Now she lives with her husband and two cats on Florida’s Space Coast, where she’s working on her next novel under an umbrella on the beach. For more information, please visit her website at www.patricebooks.com.

Congratulations, Patrice!
Posted by K. L. Hallam at 3:00 AM No comments: