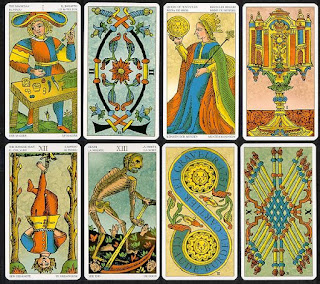 This is a weekly bog hop hosted by  Rhiann Wynn-Nolet and Kristina Perez, about what inspires you. Please join us. I will try the link, but if I can't get it to connect, please got to Rhinn or Kristina's blog and hop on.

The Tarot inspires me, questions me, and has been instrumental in helping me create my first novel length fiction.

The Tarot figure semi-prominently within the pages of ABEGALE FORCE: When Abegale finds her grandmother's mysterious herbal medical book, The Tarot fall from its pages. Her grandmother's left a note explaining how to use the cards; how to bridge her unconscious and trust her intuition—and eventually figures out where her grandmother has been for the last three years.

In my early twenties, I became fascinated with The Tarot. I began collecting several decks. As many as I could afford. They were so beautiful, mysterious, and FILLED with symbolic situations—my focus at that time. Each deck had a history and story of its own. I was writing a lot of poetry then, and delved into esoteric studies of all kinds. I went deeper into my study of The Tarot, practicing on friends, who were only too willing, practicing on myself, taking intricate notes of what I was experiencing the moment the cards were laid out, and what the cards were showing; the patterns, the symbols, and how the passing of time resulted in the card’s fulfillment of a question, or situation the person had asked about.
I sometimes think of The Tarot as a way my ‘over self’ uses the symbols in the cards to make contact with my mind—or consciousness.

They say within The Tarot every life experience can be shown, each conflict, resolution, and tool to over come. Or the process of ‘individuation’ as Carl Jung said. “They [the cars] combine in certain ways, and the different combinations correspond to the playful development of events in the history of mankind.”  To read more about Jung’s perspective of The Tarot: Carl Jung

Sounds perfect for writing fiction—right? I didn’t use the cards as a tool for creating my fiction, ABEGALE FORCE, but I suppose it’s within my subconscious from the years of study. I expect it’s seeped into my blood and now pours from my pen. Ha!  I’d like to think so, anyway.

I once read The Tarot over the phone--as a job—for about a week. An interesting experiment; I found I was less judgmental not seeing the person, only hearing their voice. I could be true to the cards and springboard a story from my intuition. I drew on conclusions from the cards laid in front of me.  There was a past, a present, and a possible future. A choice. Where again, events turn into unlimited possibilities—because nothing is fixed in time. Nothing.

I may use The Tarot the next time I’m stuck on plot, or a character’s motivation. Why not try it? What about you?  Do you have a deck?

The Fool: 0, zero, the beginning, symbolic of the egg, with its unlimited potential. It marks the beginning of the Tarot journey, The Major Arcana, ending at 22, The World--completion.
The Fool jumps off where others fear to tread.
Mary K. Greer's Blog.
I found Ms. Greer's books a great help. I highly recommend them,
and her blog for beginning readers. Have fun! 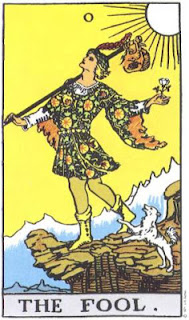 Here's my attempt to attach the linkey: Sign on!

I do have a deck and at one time tried really hard to learn to read, but it's a LOT of work, requiring lots of study. But I did use tarot cards as a literary device in my book FOOLISH (in which The Fool's journey acts as an overarching metaphor for my MC's journey).

FOOLISH sounds great! Of course, I'd love to read it. Hope to soon.

Very cool! I've never looked into them, but am intrigued for sure. If I knew what to do, I'd totally use them when writing ;)

A girlfriend of mine in high school was obsessed with Tarot. I loved watching her use them, but I was never brave enough to let her "read" me. The artwork on the decks is inspiration enough, but it would be cool to actually know what the cards actually mean!

I was obsessed with Tarot in high school. My favorite card is still The Tower. Not sure what that says about me ;-)

My friend once did a Tarot reading on me many years ago. I do find them fascinating and interesting that they've influenced your writing.

My advice is to read them. They are so much fun--totally not negative--unless the reader is!
Oddly, I haven't really looked at mine in years.
Though, once and a while I'll pull a single card to represent that moment in time.
You'd be surprised at the results. Truly fascinating.

Thanks for the comments. I have a show to rehearse for today. But I'll come and read everyone's posts before the weekend is up! XX

Your post reminded me of the movie the Red Violin. Have you seen it? Very intriguing and tarot cards play a large role.

I have a decent sized collection of tarot decks. My aunt taught me to read them when I was sixteen. As you can imagine, it didn't go over well with the nuns at school. ;)

Thanks, Alana--I am watching The Red Violin--THIS weekend!
Oh no, Chris...there's a story in there. I can just imagine the nuns walking in on the reading. What would they think? What would they say? :)

Am also fascinated by tarot cards, but in a scaredy-cat kind of way. Did you read Raven Boys, btw? There are tarot cards in there . . plus it's an amazing book.

No, I haven't Stacey. Thanks for the rec.A raven figures *very* prominently in AF.

I do have a set and I love them, but I'm not very good at readings. They play a huge part in my wip, DARKEST BEAUTY. Each one of the chapters is a Major Arcana. LOVE this post!!

That sounds like something I just gotta read, Kate! I'll be stalking your blog. :) Thanks for visiting mine.